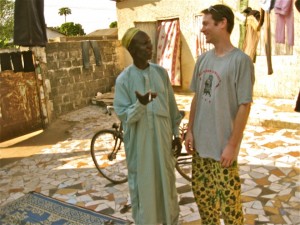 Hello friends and fans of the Kora Band!  We’ve been on somewhat of a hiatus this fall as Kane was traveling in Europe and spent some time at his teacher’s compound in Brikama, Gambia, West Africa, recording oral histories for future publication (see photo of Kane with Malamini Jobarteh, his teacher of 15 years!)  So you see, our absence was not in vain!  However we are excited to be returning to performing with an intimate house concert at Lance and Laurie’s in Burien on Saturday, December 17.  These fine folks have an ongoing house concert series and it promises to be a great evening with food, drink, music, and even a nice grand piano!  The concert is at 7:30 PM, doors open at 7:00.  Cover is $15.

If you’re interested in coming (and we hope you are) please send off an email to Lance at llh@lanceandlaurie.net and he’ll get back to you with directions, particulars, etc.

We’ll be ramping up our activities in the new year as well with shows at Traditions in Olympia Jan. 14, the Blue Monk in Portland Jan. 15, Cafe Solstice in Seattle, Feb. 11, Tula’s in Seattle March 8, and a West Coast tour in April.  We’ll keep you posted here as always!