Well our Cascades CD release tour is underway and going very well!  We kicked it off with a killer Seattle CD Release show at Tula’s on Thursday night with a great turnout and a very appreciative crowd.  The band played great and we were lucky to have Daniel Sheehan in the audience from EyeShot Jazz, taking some great pictures.  You can see some of them at his blog here (and here’s one for good measure):

That was a really great time and we’re excited to be back at Tula’s October 15 for the opening night of the Earshot Jazz Festival.

Friday night we moved down to the south Puget Sound for a little gig in Olympia at the Northern, a cool all-ages venue filled with amazing posters from the anarchist printing collective down the street.  We had a nice time and got to see some old friends of Kane’s and Chad’s at the gig too: 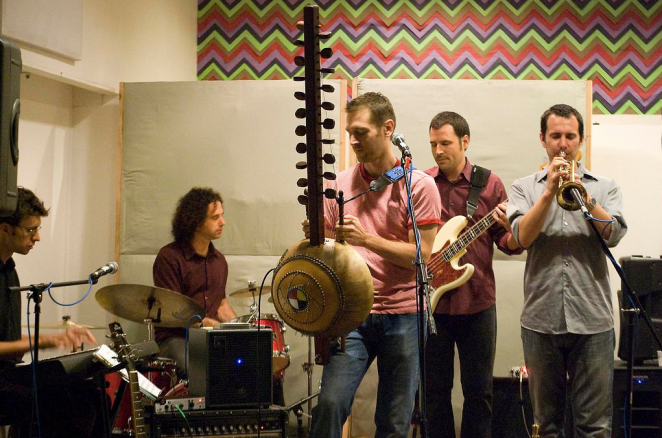 After a day off on Saturday, we went out to the Oregon Coast on Sunday to Lincoln City to play at the Lincoln City Cultural Center.  They treated us very well and put us up at the Historic Anchor Inn, the oldest hotel in Lincoln City, which was chock full of character and a great breakfast the next morning too (plus, Mark’s room had a working pump organ!).  It’s always refreshing to get out to the coast and despite a light turnout, the room was nice and we played well.

Now we’re about to leave Portland for Days Creek, Oregon, home of Jeff Bodony, maker of Mandinka Magic koras, which Kane plays, so it will be fun to hang out with him tonight and tomorrow morning.  Tomorrow night we’ll head to Talent to play at the Avalon – the Medford Mail-Tribune wrote a nice article about it here.

We’ll keep posting as we move down the coast, don’t forget to check the shows page and spread the word about our shows in California!